I drove from San Diego to Lone Pine Thursday 4/25. Got a late start. Made camp at Lone Pine Creek.

Friday morning, we drove up to portal and scouted around the trailhead, saw some German tourists get their Honda Civic hung up on the snow, but didn’t see our party. We did an acclimitization hike up to about 10,000 feet. Jonathan pointed out terrain traps, rotten snow, avy danger. It was early, the snow was firm and deep, the sky was clear and air was cold. I worked on my snow travel technique and we kicked a lot of steps. We passed through some avy debris at around 9,000 feet from the previous weekend which had taken out a climber who ended up requiring a helo evac. Stopped past some narrow ledges called Clyde’s Traverse, a bypass of the creekbed in summer. We stopped at a shallow draw just above the exit of the ledges. Hung out for an hour and caught some rays. We encountered a few climbers descending, all who reported strong winds and unsuccessful summit attempts.

Made an early start, coffee and breakfast then drove up to Portal with “A Long Way to the Top if you Wanna Rock n’ Roll” blasting. The cold weather led to perfect bootpack and we made fast time to Lower Boyscout lake where we met a party of 3-4 climbers who had bailed from their summit attempt previous day and were heading down. At Lower Boyscout the altitude began kicking in, the landscape transitioned to alpine and we stopped to melt snow for water.

I came across some other AAC members, Lee & Rani, they had just come down from a successful summit and were breaking camp. I found out that two other AAC members had attempted to summit the previous day but were turned around by winds, and had already descended and left the mountain. Without my partner, no tent poles, stove or fuel, I made the decision to descend with Lee and Rani. Lee had to pee, so I headed over to the edge of the steep slope below Iceberg lake to give them some privacy.

Just as I arrived at the top of the slope, Jonathan was slogging up, he had detoured to the bottom of the draw, far below the final steep slopes near the bottom Keeler Needle and Crooks Peak, thinking that was Iceberg Lake. He ended up adding about 500 feet of climbing to the already big day. He was toast, but he was there, and shortly after the rest of the party showed up, Jonathan Wachtel, chapter president, Tom Vokes, trip leader, Tim, As well as Sunshine and Tim who planned to climb the east buttress. The warm sun was almost t-shirt weather, but the minute the sun dipped behind the massif, temps dropped out.

We had a lively dinner where Tom learned the buttery joys of instant mashed potatoes and Jonathan W. enjoyed his Everest-grade down suiting. I learned a crucial lesson: if you’re camping in the snow, and you need to melt snow for water, and you have a liquid fuel stove, bring the liquid fuel stove, not the wobbly torch stove and a tiny 4oz fuel can. A pair of coyotes circled camp but kept their distance. My feet got cold, especially my left foot. My sleeping pad blew a baffle, I climbed in my bag before 7PM and slept like shit, but I was plenty warm all night.

We got an early start and were on the mountain in firm snow. The long main chute chute yielded to a rocky notch which revealed the final 400 feet, an exposed and steep snow slope to the summit. The crux turned out to be a short section of rock, that was unnerving but easy. The consequences of a fall here could be serious, and one of our party just ahead took a belay which I gladly glommed onto. The bootpack was well-established and it was an easy climb to the top.

We popped a few Guiness’ and took photos, lingered on the summit in the cold, clear air, admiring views in all directions. We decided to rap the chute, which was a nice way to descend, although slower than downclimbing, and it wasn’t a terribly difficult downclimb. Rappelling over the rock sections was definitely the right choice, although we did dislodge a toaster-sized rock when pulling the ropes. The alternate walk-off descent to the west was avy-prone and extremely steep, and not recommended at all.

In the mid-day sun, the east-facing main chute had softened, the descent was easy and we were back in camp after about 2.5 hrs. glissade conditions were in full effect. Terrain traps abounded in the warm sun as the glissade tracks led directly into man-sized ice-water pits. We broke camp and glissaded almost to the parking lot, enjoying numb buttcheeks and good laughs. Burgers, beers and a failed attempt at a cappucino ensued, as we learned of Ueli Steck’s death on Everest, a bittersweet moment to an otherwise fantastic weekend.

5 hours later I dropped off Jon, drove home, showered and crawled into bed. 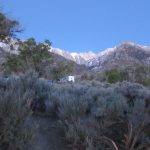 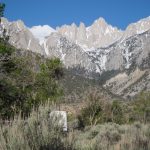 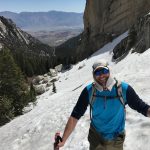 Acclimitizing and enjoying the perfect weather 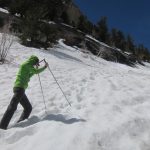 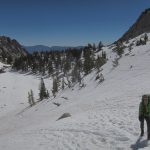 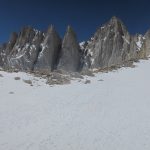 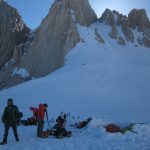 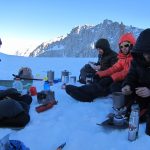 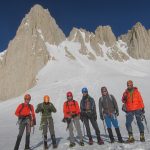 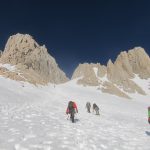 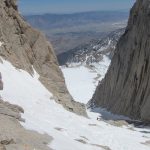 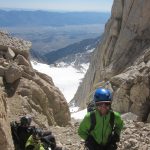 Jonathan loving it on the main chute 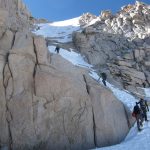 Final 400 feet, you can see the small rock obstacle 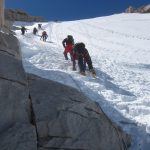 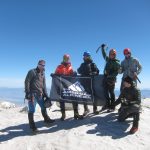 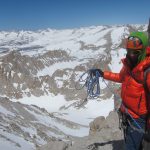 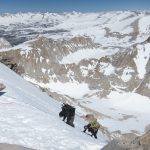 steep downclimb, we rapped it 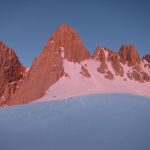 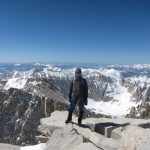 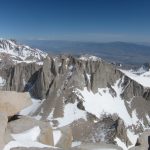 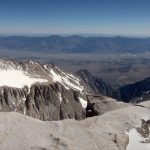 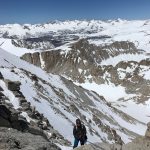