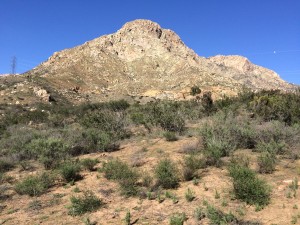 Class 2-3 scrambling in San Diego county can be hard to find without a long drive to Anza Borrego. However one of the toughest climbs in the county is located just 40 minutes from downtown – El Cajon Mountain, also known as El Capitan in Lakeside. 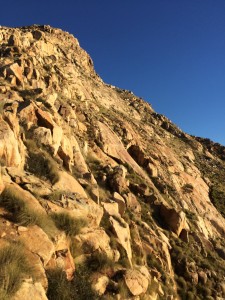 The iconic El Capitan ridgeline is visible from all over the county, particularly the El Cajon valley, Lakeside and Alpine areas. The very strenuous and very popular class 1 route approaches the summit from Wildcat Canyon rd to the north via a long, undulating fire road that is steep and causes a number of rescues every year due to exhaustion and dehydration. This trail is tough enough for the vast majority of hikers seeking a challenge, but the South Ridge proves to be a much tougher ascent that will test your scrambling and route finding skills.  It took me 3 separate attempts to reach the top of the ridge, and I was successful on January 24, 2016.  It took about 2 hours to cover less than 1.5 miles and about 2500 feet of elevation gain.  I’ve since been back many times and it’s one of my favorites.

At the end of 67 in Lakeside take Mapleview to El Monte Rd through the valley towards the El Capitan Dam.  Just before the road ends there several dirt lots adjacent to the road. Park here. The start of the climber’s trail is noted by a wooden beam over the riverbed.

Take the climber’s trail over a small bridge.  The trail is across the street from two big boulders. Climb up to the road and the first power line tower, go left at the raptor sign, staying on the road, past two abandoned mining sites, finally climbing the steep dirt slope to the power line tower up on the ridgeline.  If you want to climb the south ridge, don’t take the climber’s trail past the raptor’s sign, that will take you to the base of the climbing walls (where there are other class 3-4-5 routes for another blog post). 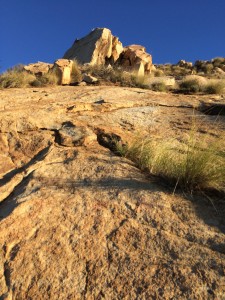 Follow the use trail up the ridge to the power line tower. The terrain is mostly steep dirt and can be slippery. Pick your way though the well-worn path, continuing to climb steeply. Stay on the ridge and avoid going too far to the left or right where the terrain quickly becomes steep and impassible. Along the way some fun slabs can save considerable time vs. the loose dirt and rock.

Soon you will reach Lunch Rock which marks the the halfway point and the beginning of class 2-3 rock. Climb up through the cave at the top of lunch rock and continue up, around and over boulder fields and slabs. You will pass a few small plateaus before finally reaching a large boulder with a mature oak tree growing straight out the west side.

At this point you can continue directly up the ridge on rock, or turn left at the tree and ascend just below the ridge via a series of steep grassy, loose, west-facing slopes and gullies typically used as the line of descent.  The gullies are never above class 2 but choked with brush and rattlesnakes, loose rock and dirt.  The rock route below stays on top of some of the large boulder sections towards the top, it is probably class 3. 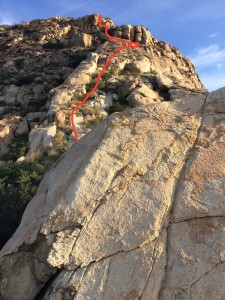 Go up to the tree and directly to the right is a narrow, steep staircase gully that takes you up to the boulder.  Scramble up a narrow ridge and shortly you will reach a large round, smooth slab and a narrow, ledge heading out onto the face.  Although a bit exposed it is very easy.  From there, follow a crack up onto the low-angle slab above, and friction climb to the next plateau and more scrambling. You will dead-end into a steep, narrow gully with a steep headwall. Look for a chockstone in a fist-width crack on the right, a bit of a hard class 3 move that pulls you up into another fun rock gully above.  Aside from the few hemmed-in areas the slab is grippy and low-angle.

Optionally, just above and west of the chockstone gully you will see a split rock which leads to a small cave with a chimney, a nice 6′ shimmy takes you to another plateau and ultimately the hardest move on the ridge.

The final part of the headwall is a brushy, hemmed-in gully, all the way to the right (east) side of the ridge.  It is a slot with “Mike” spray painted, and is just next to the big drop on the east face. Squeeze up the last few feet and there is a class 4 move with some spicy exposure to gain the low-angle slab above.

If you want an alternative to the class 4 move,  you can go left at any point and skirt below the narrow rock ridge. At the headwall there is a steep rock gully blocked with rockfall.  Skilled climbers can go over the big chockstone, there is an easy scramble left up to another narrow ledge leading to the upper slopes. There is a rappel anchor here, a good point of reference on the descent.

From the base of the headwall  is mostly small boulders and cruddy dirt slopes.  Pay attention to several large boulders you need to skirt on the way back down.  If you wish to summit, there is developed trail to the summit heading north.

The descent has tricky routefinding because of the brush and tall grass.  Descend the headwall slope into the rockfall gully, go around the blockage to the west and enter the gully there, continue down the slope, generally staying west of the ridgeline in a series of eroding slopes and rocky gullies.  Stay high and aim for the well-marked saddles which will keep you on route. Each time just go left down the gully back toward the ridge.  Regain the ridge at the tree above lunch rock. 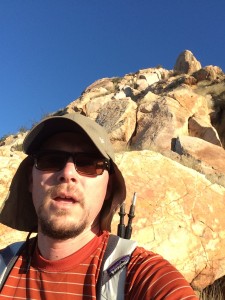 Special thanks to this good beta which got me 80% there.

Disclaimer:  this is not a hike, but a steep, cross-country scramble with loose rock, slabs, large boulders and dirt slopes. There is considerable danger of injury or even death and many rescues have taken place on this route.  A GPS is useful but there are several places where you could become trapped with no ability to retreat. A good rule of thumb – if you can’t downclimb it, don’t climb it.  Cell service is good throughout but don’t rely on it as a substitute for good judgement.  Severe heat is an issue May – October and rattlesnakes are present in early spring in the tall grassy west-facing slopes.  A google search for El Cajon Mountain rescue returns plenty of examples of people getting in trouble.