From Central San Diego, take 79 (from either Julian or Ramona) to S-2 at Santa Ysabel.  Continue North and then head east on S-22 Montezuma Valley Rd.  At mile 10.4 there is the signed Old Culp Valley Road. I saw over at campingfunzone.com that the trailhead is about 2 miles up at the signed Wilson trail.  My Subaru sedan made it but just barely, a small SUV should have no problem.  There is one particular spot where a large rock makes it challenging but mostly the road is in good shape. 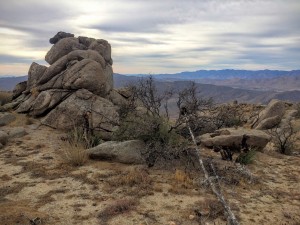 My plan was to test my colder-weather gear for the JMT up in the mountains where temps were dipping into the low 50’s and we’d had a few recent days of rain. Unfortunately we got hit with Santa Ana winds and San Diego broiled under 100 degree temps.

After a crazy day at work I finally got home around 5PM, grabbed my gear, hugged the family and made it to the Green Valley Campground kiosk at about 6:15. The kid working the kiosk was surprised anyone would be going out there, and the sun was setting fast. Despite 100+ temps in San Diego it was in the high 60’s and breezy up at 5000 feet.  To camp at Granite Springs, you pay a $5 fee, and park at the Green Valley Campground just next to the Kiosk.  Don’t park on the highway.

After finding the connector trail, I hiked briefly north towards the Sweetwater river bridge parking area, where I turned right and headed uphill through a gully on the Harvey Moore trail. Trending southeast through a narrow, steep, rocky trail, it got progressively darker and soon I found myself night-hiking through a pitch-dark new moon. As it got darker and cooler, the chapparal landscape came alive with black beetles, tarantulas, crickets, potato bugs. I saw a fruit bat on this section of the trail as well. I was hiking fast, since I had 5+ miles to go and was feeling the effects of of a couple of beers at happy hour and the adrenaline rush of night-hiking, plus the bone dry air from the santa ana winds.

After a fairly long and uneventful section of climbing through scrub and dense, impenetrable chapparal, I arrived at the ridge which transitions into the large open grassy meadow of the east mesa, a less-used area of the park mostly only used by hikers and equestrians. Given the darkness I couldn’t see far beyond the trail but I knew this section follows a draw up to the fire road at the top of the mesa. I came across a shrew-type critter and a deer as I approached Granite Springs, a primitive camp in a grove of oaks just at the eastern edge of the mesa.

Granite Springs is a trail camp with 3 tent sites and a group site which I didn’t check out. There is a pump and spring but as of Oct 2015 the spring is dry and the pump is broken. There are some water caches for equestrians but they were green when I was there. Past the well-maintained pit latrines I quickly picked a campsite (in the dark, it doesn’t matter too much), hung my food, made camp, ate a minimal dessert of peanut M&Ms and Swiss Miss, and a shot of whisky and went to bed around 9. Overall the night was uneventful, the temps stayed warm and barely got below 65, and Santa Anas gusted up to about 20mph a few times but nothing the Tarptent couldn’t handle. I alternated between being drenched in sweat and cooled by the breeze with my 20 degree bag.

Waking up around 7:30 I was treated to a spectacular sunrise over the crest of Mt Laguna to the east. Before me, East Mesa drops into the deep valley of Pine Creek below. Definitely an area to revisit on a Laguna-to-Cuyamaca route. I broke camp and made a breakfast of oatmeal and coffee before heading out.

The next morning hiked out enjoying the views of San Diego to the west in the clear air. East Mesa’s grassy, open spaces and oak-topped hills show a lot of promise for off-trail stealth camp spots. There was a large equestrian event that slowed my progress, and I helped escort an injured horse and rider back to the parking lot.

Overall a satisfying and surprisingly accessible backcountry experience. For a quick (albeit dry) backpacking trip this is a good option being only 45 minutes from central San Diego.

This hike follows the PCT from Morena Lake to a remote and undeveloped corner of San Diego County is tucked between the 8 freeway, the border, and east of the large north-south valley of the Pine Creek Wilderness.

From Lake Morena Campground, the PCT entrance and parking is just outside the gate of the park. Head south around Lake Morena and climb gently with views of the butte and the lake opening up to your right. Continue south and then east around the base of the butte, through the bone-dry landscape of chapparal, yucca, and cactus.

At about 3.5 miles in you will reach a saddle and the signed spur for the butte. Head west up the steep, rocky trail. There is a small bivy camp spot a few hundred feet up with a nice view to the north. The trail picks through boulders around the south side of the butte where views of Hauser Canyon open up to the west. Follow the abundant ducks to the summit, a flat, windy, boulder-strewn rubble pile. Hop boulders and check out the various high points for views of Hauser Canyon and Pine Creek Wilderness. It may be possible to stealth camp in the kitty litter with a tarp and bivy but this hasn’t been tested. Return to the saddle by retracing your path.

From the saddle, descend 900 feet into Hauser Canyon with wide-open views of Hauser Canyon. Note the Sunrise Powerlink coming in from the east, up and over Hauser Canyon. At the bottom the chapparal gives way to oak shaded creekside setting. There are a few camp spots here but they are trashed.

Unfortunately this area is well-used by the US Border Patrol, migrants and smugglers as well as pig hunters. I found trash in numerous sections and many hikers in this area have encountered Border Patrol agents. I hiked a few miles down the road into the canyon among the oaks, but turned around before I could fully explore the canyon. A few miles below, there is an open, grassy meadow that used to be a forest service campground, but I didn’t get that far. Given all the activity I am now quite sure I would camp here, but it’s worth another recon.

Just got back from the desert. Hiked a moderately strenuous slog up Maidenhair Falls in Borrego Springs. Nice flowers, nice beetles, nice bugs in general… we even saw a big ol’ caterpillar take a poop.